Controlled training of the immune system

The IMMUNE-Spray ApuXan® has shown in the nutritional-physiological prevention study COLD that it can train the immune system in a controlled manner. So it is better prepared for a cold or an infection. 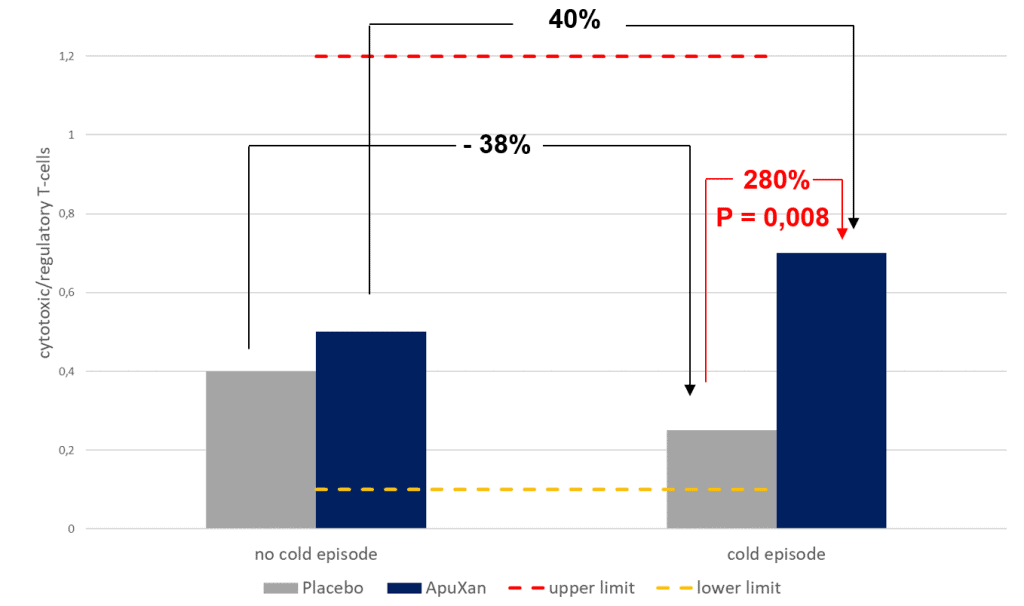 The nutritional significance of ApuXan® was verified in a randomized, double-blind, placebo-controlled clinical COLD study in colds. For this purpose 104 subjects were administered ApuXan® or placebo for 16 weeks. The selected volunteers had an increased tendency to get colds with more than 3 colds in the last 12 months. The ingredient of ApuXan® Agaricus subrufescens was classified as a food by the responsible regulatory authority before the start of the COLD study.

In viral infections, cytotoxic T cells (also called T killer cells) are crucial for neutralizing the viruses. The number of killer T cells should increase in a short time with an effective immune response. However, a general increase is associated with risks for the body. Therefore, regulatory T cells keep the production of killer T cells under control so that an autoimmune reaction does not occur. Our own immune system is directed against our organism. The quotient of cytotoxic and regulatory T cells describes the relationship between the two cell types. In a healthy state, the ratio should be balanced and only shift in favor of the T killer cells in the event of an infection, i.e. The quotient of cytotoxic / regulatory T cells should increase.

The COLD study showed that ApuXan® supports the immune system. If there is no common cold, the quotient of the cytotoxic / regulatory T cells in the group treated with placebo and ApuXan® is approximately the same. ApuXan® keeps the immune system in balance.

In the case of a cold, the quotient of cytotoxic / regulatory T cells in the ApuXan® group is significantly higher than in the placebo group (p = 0.008). This means that the immune system has been trained and therefore responds better to infections. The nutritional-physiological effect of beta-glucans, the nutritionally important component of the fungus Agaricus subrufescens, is very well known. The problem with beta-glucans, however, is that they are insoluble in water and can therefore be very poorly absorbed by our body. The production process PuranoTec® from ApuXan® changes this. It brings the beta-glucans into a form so that they can be absorbed by the body. Beta-glucans are recognized in the body by the immune cells as quasi-germs (pathogens) and trigger an immune reaction, but without causing the typical side effects. This allows beta-glucans to train the immune system nutritionally. ApuXan® is a dietary supplement and can therefore contribute nutritionally to a normal function of the immune system. Apuxan® is not a drug and is also not suitable for the treatment of diseases.

APUXAN® is harmless according to the COLD study

The nutritional-physiological prevention study COLD examined ApuXan® over 16 weeks regarding its safety with the following result:

ApuXan® is well tolerated and safe.

Compared to placebo, ApuXan® does not lead to any side effects.

Besides efficacy, the safety of a preparation is of central importance. Active ingredients or combinations of active ingredients can have negative effects on the body in addition to the desired effects.

ApuXan® was monitored in a nutritional-physiological study with regard to its safety for the consumer. Various liver and kidney parameters were determined over 16 weeks. None of the monitored blood values showed a statistical deviation from the standard value during the course of the study. From this it can be concluded that ApuXan® has no negative influence on the liver and kidney.